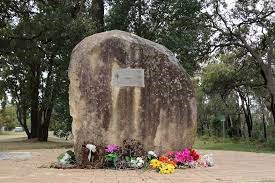 Back to blog archive

Warning – This week’s Culture lines deals with culturally sensitive material and the links to sites used may use images of Aboriginal and Islander people now deceased.

The Pinjarra Massacre occurred on October 28th, 1834.  Estimates of between 15 – 30 Aboriginal people shot and killed by a party of soldiers, police and settlers.

Following the death of a young settler named Nesbitt, this statement was published by the Editor in the Perth Gazette. in July 1834 leading to the Pinjarra Massacre.

“Although we have ever been the advocates of a humane and conciliatory line of procedure, this unprovoked attack must not be allowed to pass over without the infliction of the severest chastisement; and we cordially join our brother colonists in the one universal call – for a summary and fearful example.  We feel and know from experience that to punish with severity the perpetuators of the atrocities will be found in the end an act of the greatest kindness and humanity.”

Yorganop Carer shared this information with us

What a lot of Noongars and Wagellas don’t know is that they went in with force to Pinjarra because the last of Yagans tribe were hiding out down there.

It is in one of the books that the Beeliar Tribe had vanished from their home land after Yagan’s death, they looked all over Beeliar Country and later found them down Pinjarra several months later (which was the Pinjarra massacre) This happened because some of his tribe witnessed his death and knew they would retaliate as they did in Pinjarra.

Pinjarra is about 1 hour south of Perth. It is easy to do a day trip to visit and pay your respects at the Pinjarra Massacre Monument and Park

Map of Colonial Massacres across Australia

Stay up to date

Nurturing our children to flourish